We arrived to Sloan bright and early to start our plan for Ronan. Once again, you can never make a plan with all of this because as of now, our plan has changed. We headed back to Dr. Modak’s office and as soon as we walked in I looked at him and told him Ronan’s arm is worse and the pain is unbearable. I slowly pulled Ronan’s little arm out of his shirt to show Dr. Modak how swollen it looks now. He looked like he was going to be sick and was taken aback. This man is a doctor and to see the look on his face was upsetting to say the least. We talked with him and he decided we needed to hold off on the NK Cell trial and get Ronan’s pain under control. He sent us down for an X-ray as he was concerned Ronan may have a fracture due to how little he is using his arm. The X-ray came back and showed a lot of swelling, but no fracture. Dr. Modak told us what he felt like the best course of action was now which is to start radiating Ronan’s right shoulder today as well as admitting us to start him on his high dose chemotherapy. He said we could go home and do these things and Woody and I both said no way… we wanted to start ASAP. Dr. Modak made a few phone calls and now, we sit and wait to start Ronan’s radiation.

Woody looked at me in the waiting room with the tears welling up in his eyes. My turn to take over being strong for a while. I looked at him and I said, “What are you doing…. knock it off.” He just replied that he is upset because Ronan is in pain. I told him I was too, but that’s why we’re here now we’re not fucking around.  We’re not waiting until Monday, we’re not being put off, we are going to take care of this now so we can get back on track. We are in New York City for crying out loud and we are not wasting anymore time. I told you I feel strong in this city. Today I’m not sad. Today I am determined and strong. I know we are in the best place possible and Dr. Modak knows what is best. To say I love that man is an understatement; he is brilliant, smart, caring, and knows what is best for our son. Between him and Dr. Kushner; Ronan could not be in better hands. Knowing this gives me strength too.

After another grueling long day, we are finally settled in our room for the night. Today was a day full of dealing with a lot of Ronan’s emotions as he is beyond mad that we have to be at the hospital and not out romping the streets of NYC. We decided to check in until Sunday or Monday, so we could start Ronan’s high dose chemo tomorrow. Dr. Modak got us started on Ronan’s first session of radiation tonight. I cannot tell you how proud I am of my son. We went back to the room and Ronan was so upset and scared about the big table he was going to have to lay on. It took me 20 minutes with the 3 technicians ever so patiently waiting for me to get Ronan calmed down. He was so upset, and was crying and shaking. I sat and talked him through it, told him exactly what they were going to do, which was nothing scary at all… they were just going to take some pictures of him but everybody would have to leave the room, including me. He was not happy at all but after about 20 minutes, I got him to lay down into his little body mold that we had done earlier in the day. I looked at him in the eyes and told him how he could do this, without his sleepy medicine, and that I would be right back. He screamed for me as I left, but the techs strapped him down to protect him from falling and they came out of the room to start the radiation. I watched Ronan on 3 different cameras and I was able to talk to him the entire time on the speaker system. I watched as my baby held as still has he possibly could, his little lip quivering, being the bravest boy he could be. At one point I looked over at the Tech, tears streaming down my face, and told her this was beyond fucked up. Because it fucking was. It is probably one of the hardest things I’ve ever had to watch in my life. Not that the radiation was painful in any way…. because it is not. The whole scenario of watching Ro on a monitor, having radiation because the cancer is eating away at his little body was much too hard to handle. I did my best to continue to talk him though it and the whole thing took about 15 minutes; but if felt like a lifetime. Nobody could believe my little guy held so still, without anesthesia. Everybody was saying how amazing it was that a 3 and a half year old held so still, for so long. I could not have been more proud. After we returned to our room, Woody soon followed. He had missed the radiation part due to collecting our things at the Ronald McDonald House. He asked how it went and I quietly said fine, but soon ended up in his arms, crying like a baby. He held me tight for a few minutes and let me cry. Guess I’m not feeling as strong as I was earlier today. Sometimes my little badass attitude can even trick me into thinking I can handle this, no problem. I have decided I am only human and only can endure so much. Tonight in my husbands arms is just where I needed to be. We are so lucky to have each other.

Ronan will do 14 more days of radiation and start Ronan on a different high dose of chemo tomorrow as well which will be a 5 day treatment. Here we go again…. another little detour along the way to getting Ronan well. What else do you have for us world?? I’m trying my hardest, but this is getting beyond annoying. I just want my baby better already.

After talking to the Orthopedic doctors, they have found that Ronan has a Lytic Bone Lesion on his right shoulder. It basically means that the bone is becoming hollow. I am telling myself it sounds scarier than it is; which is true. It is something that can easily be fixed as Ronan is young and his bone will heal. It is going to take radiation to take care of the problem. Radiation is very effective in Neuroblastoma, so we have all the faith in the world. They want Ronan to be careful with his arm, so he does not end up with a fracture and say the radiation should make the pain disappear in a few days. Crossing all my fingers and toes. I cannot stand seeing him this way.

This is all the update I can do tonight as I am beyond tired, but wanted to take the time to let you all know what was going on. Please continue to send our little guy all your love and prayers. He needs them so badly. Sweet dreams, friends. 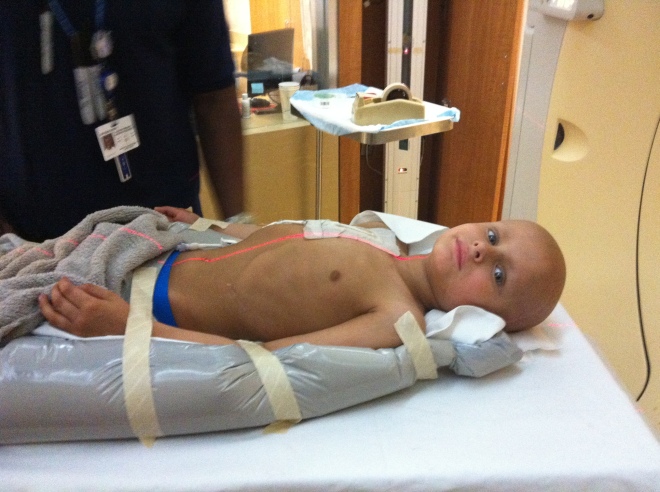 I would like to say a big FUCK YOU CANCER for doing this to my beautiful baby boy. I hate you very, very, much.

25 thoughts on “Bravest boy in the world”