Ronan. I have had so much go on the past couple of days but all I can think about is Ben died today. Those are the words that jolted me out of my Ambien induced coma last night at 12:11 a.m. I was asleep, in Quinn’s bed and you know once I take my Ambien, World War II could be going on in our house and I wouldn’t know it. Last night, I was ripped from my sleep and straight up in my bed, not knowing why. I reached for my phone because something just felt not right. That’s when I read the words, “Ben died today.” My stomach dropped. I immediately sent your Mr. Sparkly Eyes a text that simply said, Ben died. Fuck. Fuc (which is our code word for Fuck You Cancer) I got up, I kind of remember going into our bedroom and just saying out loud to your Daddy, “Ben died. FUCK!” I don’t remember what happened next except my face was very wet. I woke up in the morning, back in Quinn’s bed praying that I had only dreamed of Ben dying. I grabbed my phone and read the words, once again. No. No. No. No. Not Ben. I got up, showered, got your brothers up as we were running late. I was in the middle of making lunches. Your brothers came out to grab some breakfast. Your Quinny was complaining about the shorts your daddy had picked out for him to wear to school. They were just normal, corduroy shorts and I told him how handsome he looked. He started to say how he didn’t want to wear them, how it wasn’t fair. I stopped in the middle of making his sandwich, looked at him and I said, “Ben died. Ben died and you are going to complain about the shorts you are wearing? You are not allowed to do that.” Was this too harsh for an 8-year-old? I don’t fucking think so. It’s real life. It’s real life where I’m sorry but we don’t get to complain about things that don’t fucking matter anymore. There are bigger problems in life. I refuse to let your brothers, forget that. I refuse to let them grow up in a world where they are ungrateful that they are alive and get to wear stupid shorts that look nice when all they want to do is wear Nike Basketball shorts. It’s not happening when you and Ben would have given anything to wear nice corduroy shorts.

So Ro. I knew that day I saw Ben at America’s Taco Shop that it was really you that I was seeing. It was not just a coincidence. It was a very well orchestrated plan thought out by you. I knew that day, that Ben probably was not going to be around much longer. I knew that this was your way of telling me this, but it was also your way of telling me that you were going to take care of him. I knew this then, but I know this now for a fact. I have not told his mama this. I talked to her today. I wanted to tell her this, but I could not find the words. I was the one, crying on the end of the phone while I listened to her tell me that she was fine. How she was cleaning the house, but she was fine. What do you say to that? I did the only thing I know how to do. I simply said, “Barb. You are not fine. You are in shock. You are having a physical reaction to Ben being gone and your mind and your body are trying to protect you.” She said she wasn’t sure, that she really felt fine. The tears slid down my cheeks. “O.k.,” I said. “Please just know that I am here when the shock wears off. I’m much further down this road, so I kind of get it. Not entirely, but kind of.” All I wanted to do was reach through the phone and wrap my arms around her. All I wanted to do was to bring Ben back so she wouldn’t have to be fine. I felt so useless and so helpless. I tried to think back to what happened right after I lost you. I don’t remember much but I think I wrote to you. I’m sure there were so many people out there going, “Has she LOST her mind?!! Who writes a blog post, not even 24 hours after their child dies?!!!” I guess that was my version of being fine. Everybody deals with things differently. There is no right answer. You know what else, makes me love Ben’s mom even more? The fact that when she did do her update (I’m assuming it was her) that she simply titled it, “Ben died yesterday.” That was very Maya like if I do say so myself. Regardless if they are religious or not, it was so fucking refreshing not to read, “HALLELUJAH! Ben is with our Lord Jesus Christ! We are so happy!” The next caring bridge that I have to read, that says something like that, I’m going to punch my fucking computer screen. I don’t care how much you believe in God…. stop fucking lying. No parent is happy and rejoicing that their child is dead. Let’s call a spade and fucking spade. I don’t care if God is your fucking BFF. The fact of the matter is your child is gone and let’s just be honest for .2 seconds and be honest about it like Ben’s mom. Ben died. That says enough. That says everything and more. It is enough. Just let it be enough and nobody needs to scream Hallelujah about it.

I know I worry about you being safe, Ronan. But I don’t worry about Ben, because I know he is with you. Does that make sense? I may not know that you are safe, but I know you are now watching after your little buddy and I know that you two are together and so I know you have a little friend to pal around with. I pictured you two, today playing with each other and running all around. I actually pictured you both on this earth and how you would have been great friends. You don’t get to be here together so you being somewhere else, will have to do. It was easy for me to picture the two of you, together which is weird because we didn’t even know Ben that well. We only had a few interactions with him but they were always one’s that I could not forget. I never could get his little mischievous smile, out of my mind. It was so much like yours.

Words failed me today with Ben’s mom. There are no words that could ever be good enough. I’m so sorry was all I could really do. If I had to tell her some things, it would be this.

This should not have happened. It should not have and you don’t ever have to be o.k. with this. You won’t ever, “get better,” or get over this. And you should not. He was your Ben. Your one and only sweet Ben and this just proves that life is not fucking fair. Nobody will ever have a Ben like yours. This is o.k. You are the only one that was special enough to have him. People will try to understand but they won’t. This is o.k. too. He is your best kept little secret. Your love is your best kept little secret. The best kept little secret that nobody can take away from you because it lives closest to your heart and your heart, ONLY. Nobody else’s. Ben knows how much you loved him. Ben knows you would have traded your life for his in an instant but it was not your choice. You will learn to accept this and let his love, guide you for the rest of your life. Don’t question your heart. Ever. With anything you do anymore. Even if that just means deciding what to cook for dinner. Everything will eventually mean so much more than it did before because Ben will be behind everything you do. Not that he wasn’t already before, but now his light will become that much stronger even on your darkest of days when you don’t want to get out of bed. Don’t fight this. Stay in bed and have lots of dark days. He is worth every single tear. He is worth your shattered, broken heart. He will help you put it back together when it is time. There is no time frame for this. Don’t listen when you hear this gets easier as time goes on. Time is irrelevant. Time means nothing. Time has stopped. You were his teacher for an amount of time, that was cut way too short. Let him be your teacher now. I know he has so much he wants to teach you. I know he has so much he is going to teach you. He will keep you safe. I promise. I’m so sorry. I’m so sorry and I wish I could bring him back. I can’t so Ro will watch over him. I don’t believe in much these days, but I believe in this. I don’t just believe in this, I know this. I love you. I love Ben. I love the love you two have for one another. Not had. HAVE. You will always have that. Always.

Alright Ro baby. It’s been a long day full of too many tears and homemade potato latkes. I peeled the fuck out of the potatoes today while I cried for you, me, our family, Ben, and Ben’s family. I made some pretty kick ass potato latkes. You would have loved them. I’m sorry that cancer is an asshole, therefore you couldn’t be here to eat them. I’m sorry. I’m sad. I love you and I hope you are safe. Thanks for taking good care of Ben. I love you both to the moon and back. Sweet dreams, baby doll. 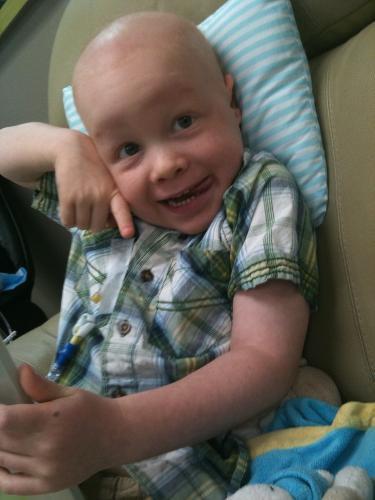