A few of you have asked what the warning signs of Ronan’s cancer were. I’m thinking there are some newer readers out there, who have started reading this blog, without going to the beginning of Ro’s story. Or maybe I never explained it well. I never re read what I write and I can only imagine the jumbled mess of words that I probably display. When I write, I don’t think. I just feel and my fingers just kind of take off, without thought, letting my feelings do all the work. Thanks for sticking with me, throughout this journey of love and pain. I don’t know if I tell you all often enough, but the love that you have for my baby, for my family, for me, for my crazy writing; means the world to me. So thank you.

I am going to recap for those of you who are wondering what the signs were. For those of you who will now fear everyday that your child could be next…. because sadly I’ve learned this can happen to anyone. I will forever be pissed at the lack of knowledge I had for Childhood Cancer before all of this. Every parent should be informed and aware once they have children. If I had been aware, would we have caught this sooner? I’ll never know, because unfortunately, nobody can give me a straight answer. They don’t even know what is the cause of this awful disease. And there are too many people in the world who don’t care enough to fight and find out, because it is so rare. Or because it is too painful. Bullshit. Even if only 50 kids a year were diagnosed; which is not the case….. that is way too many to still be dealing with the nobody knows in 2011. Around 800 kids are diagnosed a year. 800 kids who survive by chance, not because there is a cure. It’s pure luck. My Ronan deserved to be lucky and I’ll never understand why he wasn’t. I would give anything to have him be the poster child for this disease, because he survived it. Not because he is dead and now I have to take his name and my pain and turn it into something positive. I have to take the death of my child, my baby, my soul mate and give everything I have to this so maybe, someday, people will start paying attention to kids who have cancer. Just maybe, I can help be a voice to save another Ronan out there; so another mom won’t have to find out what it’s like to sit in her dead child’s bedroom and sob while holding a bag full of his ashes. That is the only physical form I have left of Ronan now. His body, his eyes, his fingernails, his sweet little lips, the nape of his neck where I used to get my “sugar,” from. They are in a bag that looks like sand. All because of Childhood Cancer. All because Doctors, Science, Medicine, and Awareness has failed in 2011. Nobody wants to pay attention to Childhood Cancer. I guess it feels better for people to focus on things like Education because seeing a child with cancer, is too hard to handle. Ignorance is bliss. Best saying ever.

So, my friends. The signs. The Warning Signs. There really wasn’t any. Fun huh. I had taken the 3 boys to my parent’s in Washington State, just as I had every summer since the twins were born. We spent almost all of July there and returned to Phoenix at the beginning of August. We had the BEST time. We spent most of our time, doing simple things, like playing outside, fishing, enjoying time with my beautiful 70-year-old, youngest ever, stepfather; who is a big kid himself. He ADORES my boys and the time they have with him every summer, has always been one of my favorite things to watch in life. Ronan was eating normally, sleeping normally, running around like his crazy self. It was a few days before we were heading back to Washington when I took the boys and made them put on button up shirts, as I wanted to get a picture of them for our annual Christmas card. I spent an hour or so, snapping pictures of them, which has always been another one of my favorite things to do in life. As I was finishing up, going through the pics, I noticed Ronan’s left eye. It looked a little off in the picture that I had taken. Here it is::: 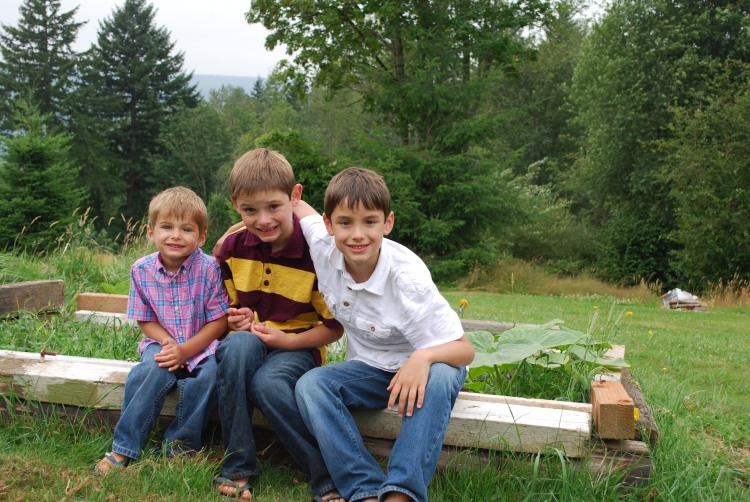 I assumed it was just some dust, allergies, or a bug bite. We had spent a ton of time outside and any of those things could have easily been the culprit. We returned to Phoenix on a Saturday, a few days after this picture was taken. Ronan’s eye still looked not quite right. Woody noticed right away. We made a doctor’s appointment for Monday morning just to check it out. The thought that it could have been Cancer, never even crossed our minds. Our lovely doctor, thought Ronan just had a cyst on the inside of his eyelid and refered us to a Children’s Opthamologist I took him that next day and ended up walking out in the middle of the appointment with her because of her rudeness and lack of concern/compassion that she had for my child and a mother who was scared shitless. I was panicking while trying to stay calm. I threw Ronan in the car, with his eyes still dilated and found another Child Opthamologist to see Ronan that next day. They had originally told me that they couldn’t see him until September. I told them that was not acceptable, that something was going on, and he needed to be seen that next day. They listened and we saw Dr. Cassidy the next day. He knew that something was wrong right away and sent us to PCH for a CT scan. Even at this point, I didn’t think Ronan had Cancer. I mean, really? That doesn’t happen to kids in this world. Especially not my Ro. I was about to learn in a very hard way; that it in fact does. More often than people realize.

So, that is it peeps. The warning signs, which really were none. But guess what??? Doctors can test for this kind of cancer with a simple urine test. YUP. It’s as easy as that. But once again, the bullshit answer to that is not enough kids are diagnosed. And I’m sure insurance doesn’t cover it. I’ll always wonder if Ronan was born with this. What if we would have caught it earlier… would he still be here? Most kids that are diagnosed with Neuroblastoma, are a Stage IV, because it is a silent killer due to the lack of symptoms. The lovely lack of symptoms, but you test for it by peeing in a cup. I am not an expert on why this isn’t done. I’m sure there are 100 different reasons. I am just a mom. Another mom, who has lost a child to cancer. But I was never given a choice as to whether I wanted my child tested for this or not. I can guarantee you, if I had been educated, and given a choice, all 3 of my kids would have been screened for this disease. Just like when they test for Down’s Syndrome when you are pregnant with a child. I was always given a choice for that and I always chose yes. I would have chosen yes, if Childhood Cancer would have been put on the plate. Would that have changed the outcome of all of this? I don’t know. But I should have been given the choice as a parent, to make that decision myself. The Medical world has a responsibility to make people aware. They are not doing it, so it’s parents like me who have to do it, until things change in a very drastic way. To them, Ronan is a statistic and nothing more. They just killed one of the most beautiful things to have ever touched this planet. And now, I have to figure out what to do with all this because I will never come close to feeling peace again in my life; unless something is done.

G’nite my lovilies. G’nite my Ro. I may be too tired to write to you tonight. I love you to the moon and back and hope you are safe.

24 thoughts on “The Lack of Warning Signs”